Meaning of Contract Farming is an agreement between farmers and marketing firms for the production and supply of agricultural products under certain agreement, frequently at predetermined prices.

Contract farming is a triangular benefit 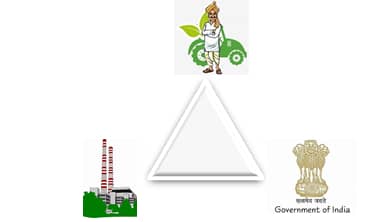 NEED FOR CONTRACT FARMING IN INDIA

THE ADVANTAGES OF CONTRACT FARMING

BENEFITS TO THE FARMER

BENEFITS TO THE COMPANY

Under this situation present central government has taken a bold step and many agricultural reforms. in 2018, the union ministry of agriculture circulated a model law on contract farming. it was called ‘the State /UT agricultural produce contract farming (promotion and facilitation) act, 2018’. this was done to buyer through legal support, including dispute resolution. the procedures for registration and recording of agreements vary across states. the committee of state ministers on agricultural reforms recommended that a instead of a apmc, district-level authorities can be set-up for registration of contract farming agreements. under the draft model act, every agreement should be registered with a registering and agreement recording committee, which will be set up consisting of officials from departments such as agriculture, animal husbandry, marketing, and rural development. such a committee can be set up at the district, taluka or block levels.

Four-day world congress on agroforestry in Delhi pushes for accelerating growing trees on farms for sustainable agriculture and mitigating climate change impacts In what is seen as a ground-breaking move, India has become the first nation in the world to adopt an agroforestry policy. The National Agroforestry Policy, which deals with the practice of integrating trees, crops and livestock on the same plot of land, was launched February 10, the first day of the World Congress on Agroforestry, held in Delhi. The policy, approved by the Cabinet on February 6, deals with problems agroforestry sector is facing at present, including adverse policies, weak markets and a dearth of institutional finance.

We Provide you, Great Solutions…!