is Caress, a loving touch for your loved ones.

is for hope the encouragement you give.

is for able, for you surely are

is for treasure that of your friendship binding

is for upstanding the honourable way to be

is for Radiant, it’s your personality

is for Valiant, the way you approach life

is for Early, Promptness is a virtue

is a diamond, the brilliance you shine

is for animated, let your energetic spirit shine 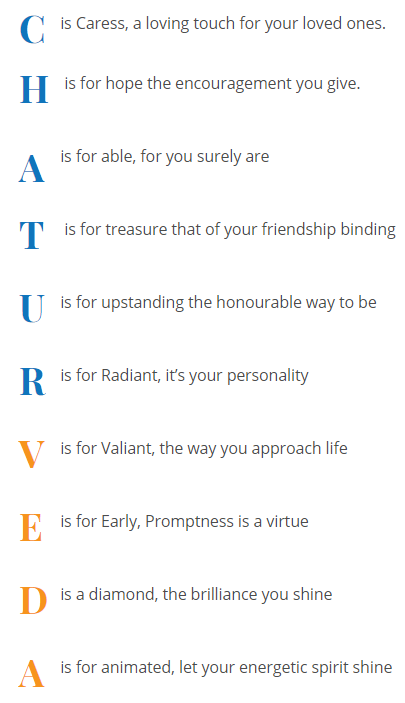 The term Chaturveda Plantech Mahogany Agroforestry, is quite unique that has originated from Hindu mythology. It is a combination of three words viz., Chatur, Veda, and Samhita, meaning four (numeric), Wisdom (knowledge), and assembly (collection) respectively. The collection of Veda mantras (chants) is literally regarded as Chaturveda.

Chaturveda Plantech Mahogany Agroforestry, is deemed as the world’s oldest literary works, primarily bestowed through oral heritage. Vedas have presumed to originate at least 1.97 billion years earlier at the beginning of human civilization.

As evident, Chaturveda gives a divine impression to discharge human obligations with pious thoughts. It motivates human beings to attain objectives that care for human welfare. According to Shiva Purana, Chaturveda imbibes the qualities of love, empathy, and creativeness. It works to drive people to serve others without any self-interest to attain community goals. The group of people or social entity, working on the principles of Chaturveda is amiable, ambitious, cooperative, enthusiastic, and with a positive frame of mind. They always work towards attaining success with honesty, bearing a philosophical attitude, and show their strength in meeting production-oriented targets.

Embracing the maxims of Chaturveda makes people decent, always good at heart, and zealous to help others achieve the targets with a productive mindset.

They are able organizers, managing things with precision, looking after the interests of others as a friend, philosopher, and guide. Being a good companion, they listen to the difficulties of others and try to resolve them with inspirational talks and deeds.

Chaturveda Plantech Mahogany Agroforestry firms ensure that doing business is not the primary objective of an entrepreneur. The aim should be to draw a combination of business motives and the inspirational social service to identify the weaker areas of human functionalities, and thereby, make them stronger in those fields. The idea is to dig out their hidden skillsets and re-establish their potentials for productive purposes.

Adopting the doctrines of Chaturveda Plantech Mahogany Agroforestry makes one become a leader, who has conviction and farsightedness to lead the community at large towards a preset goal with both honesty and sincerity. Business with social welfare is the key to success.

They are kind-hearted and love kids and pets. Besides, they are innovative and try to attain as many tasks as possible. Also, they are very friendly and social and decent motivators in production-centric circles. Possessing 3 as a numerological character, they are creative, intellectual, flexible with a confident mindset, zealous, and meticulous.

Mahogany tree is a fast growing and most demanded furniture tree in the world. Absorbs maximum CO2 and gives plenty O2 to mankind.

Mahogany agroforestry improves water retention and water availability for the farmer and control runoff and soil erosion, there by reducing losses of water,soil, material, organic matter and nutrients

Mahogany plays a vital role in preserving biodiversity and eradication of carbon gas emissions, evolving green house effects in order to counter the harmful out comes of ecological imbalances

A plant of conservation concern is what the Mahogany Tree (Swietenia Macrophylla King) is, mainly due to illicit and harmful logging practices. To conserve the species and provide a sustainable source of this important timber, it has been planted in many agroforestry systems in the Indian subcontinent.

Mahogany-Agroforestry is primarily conceived for formation with agricultural crop variables, preferred to facilitate the project.

It is closely integrated with perennial food crops, like maize, millets upland rice, bananas cassava, wheat, etc. by pruning to lower the shade and maximize the plantation type. 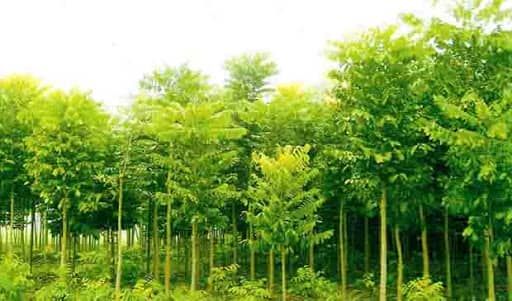 A Carbon Credit is a generic terminology in terms of any tradable permit or certificate that is chosen to represent the obligation to emit one ton of carbon dioxide or its equivalent volume of another greenhouse gas.

Carbon credits and carbon economies are an integral part of both national and international attempts to alleviate growth in greenhouse gas (GHG) concentration levels. One carbon credit represents one ton of carbon dioxide or equivalent gases in some marketing domains.

Carbon trading is an implementation of an approach to emissions trading. Emissions of greenhouse gases are regulated, and then markets are being used to distribute emissions within the controlled source community.