A Carbon Credit is a generic terminology in terms of any tradable permit or certificate that is chosen to represent the obligation to emit one ton of carbon dioxide or its equivalent volume of another greenhouse gas.

Carbon credits and carbon economies are an integral part of both national and international attempts to alleviate growth in greenhouse gas (GHG) concentration levels. One carbon credit represents one ton of carbon dioxide or equivalent gases in some marketing domains.

Carbon trading is an implementation of an approach to emissions trading. Emissions of greenhouse gases are regulated, and then markets are being used to distribute emissions within the controlled source community.

The aim is to encourage business models to push commercial and industrial processes in the pursuit of low emissions or less carbon-intensive solutions than those used when carbon dioxide and other GHGs are not released into the atmosphere.

This strategy can be applied to fund carbon reduction policies among trading collaborators in and around the globe, as GHG mitigation programs create credits. 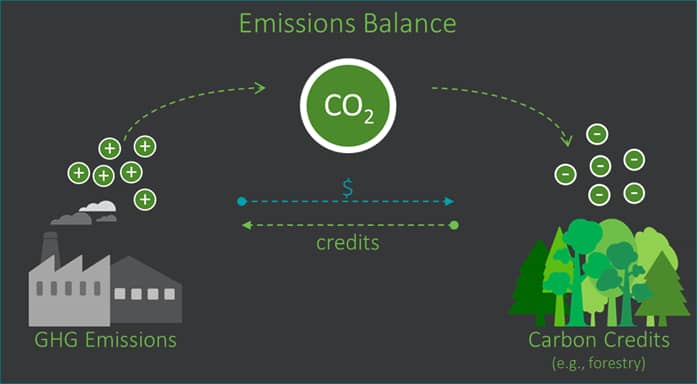 Carbon credit and how you can make money from it

Carbon dioxide, the most important greenhouse gas produced by combustion of fuels, has become a cause of global panic as its concentration in the Earth’s atmosphere has been rising alarmingly.

This devil, however, is now turning into a product that helps people, countries, consultants, traders, corporations and even farmers earn billions of rupees. This was an unimaginable trading opportunity not more than a decade ago.

Carbon credits are a part of international emission trading norms. They incentivise companies or countries that emit less carbon. The total annual emissions are capped and the market allocates a monetary value to any shortfall through trading. Businesses can exchange, buy or sell carbon credits in international markets at the prevailing market price.

India and China are likely to emerge as the biggest sellers and Europe is going to be the biggest buyers of carbon credits.

Last year global carbon credit trading was estimated at $5 billion, with India’s contribution at around $1 billion. India is one of the countries that have ‘credits’ for emitting less carbon. India and China have surplus credit to offer to countries that have a deficit.

Carbon, like any other commodity, has begun to be traded on India’s Multi Commodity Exchange since last the fortnight. MCX has become first exchange in Asia to trade carbon credits.

So how do you trade in carbon credits? Who can trade in them, and at what price? Joseph Massey, Deputy Managing Director, MCX, spoke to Managing Editor Sheela Bhatt to explain the futures trading in carbon, and related issues.

What is carbon credit?

As nations have progressed we have been emitting carbon, or gases which result in warming of the globe. Some decades ago a debate started on how to reduce the emission of harmful gases that contributes to the greenhouse effect that causes global warming. So, countries came together and signed an agreement named the Kyoto Protocol.

The Kyoto Protocol has created a mechanism under which countries that have been emitting more carbon and other gases (greenhouse gases include ozone, carbon dioxide, methane, nitrous oxide and even water vapour) have voluntarily decided that they will bring down the level of carbon they are emitting to the levels of early 1990s.

A company has two ways to reduce emissions. One, it can reduce the GHG (greenhouse gases) by adopting new technology or improving upon the existing technology to attain the new norms for emission of gases. Or it can tie up with developing nations and help them set up new technology that is eco-friendly, thereby helping developing country or its companies ‘earn’ credits.

India, China and some other Asian countries have the advantage because they are developing countries. Any company, factories or farm owner in India can get linked to United Nations Framework Convention on Climate Change and know the ‘standard’ level of carbon emission allowed for its outfit or activity. The extent to which I am emitting less carbon (as per standard fixed by UNFCCC) I get credited in a developing country. This is called carbon credit.

These credits are bought over by the companies of developed countries — mostly Europeans — because the United States has not signed the Kyoto Protocol.

How does it work in real life?

Assume that British Petroleum is running a plant in the United Kingdom. Say, that it is emitting more gases than the accepted norms of the UNFCCC. It can tie up with its own subsidiary in, say, India or China under the Clean Development Mechanism. It can buy the ‘carbon credit’ by making Indian or Chinese plant more eco-savvy with the help of technology transfer. It can tie up with any other company like Indian Oil, or anybody else, in the open market.

In December 2008, an audit will be done of their efforts to reduce gases and their actual level of emission. China and India are ensuring that new technologies for energy savings are adopted so that they become entitled for more carbon credits. They are selling their credits to their counterparts in Europe. This is how a market for carbon credit is created.

Every year European companies are required to meet certain norms, beginning 2008. By 2012, they will achieve the required standard of carbon emission. So, in the coming five years there will be a lot of carbon credit deals.

What is Clean Development Mechanism?

Under the CDM you can cut the deal for carbon credit. Under the UNFCCC, charter any company from the developed world can tie up with a company in the developing country that is a signatory to the Kyoto Protocol. These companies in developing countries must adopt newer technologies, emitting lesser gases, and save energy.

Only a portion of the total earnings of carbon credits of the company can be transferred to the company of the developed countries under CDM. There is a fixed quota on buying of credit by companies in Europe.

How does MCX trade carbon credits?

This entire process was not understood well by many. Those who knew about the possibility of earning profits, adopted new technologies, saved credits and sold it to improve their bottomline.

However, the price to sell carbon credits at was not available on a public platform. The price range people were getting used to was about Euro 15 or maybe less per tonne of carbon. Today, one tonne of carbon credit fetches around Euro 22. It is traded on the European Climate Exchange. Therefore, you emit one tonne less and you get Euro 22. Emit less and increase/add to your profit.

We at the MCX decided to trade carbon credits because we are in to futures trading. Let people judge if they want to hold on to their accumulated carbon credits or sell them now.

MCX is the futures exchange. People here are getting price signals for the carbon for the delivery in next five years. Our exchange is only for Indians and Indian companies. Every year, in the month of December, the contract expires and at that time people who have bought or sold carbon will have to give or take delivery. They can fulfill the deal prior to December too, but most people will wait until December because that is the time to meet the norms in Europe.

Say, if the Indian buyer thinks that the current price is low for him he will wait before selling his credits. The Indian government has not fixed any norms nor has it made it compulsory to reduce carbon emissions to a certain level. So, people who are coming to buy from Indians are actually financial investors. They are thinking that if the Europeans are unable to meet their target of reducing the emission levels by 2009 or 2010 or 2012, then the demand for the carbon will increase and then they may make more money.

So investors are willing to buy now to sell later. There is a huge requirement of carbon credits in Europe before 2012. Only those Indian companies that meet the UNFCCC norms and take up new technologies will be entitled to sell carbon credits.

There are parameters set and detailed audit is done before you get the entitlement to sell the credit. In India, already 300 to 400 companies have carbon credits after meeting UNFCCC norms. Till MCX came along, these companies were not getting best-suited price. Some were getting Euro 15 and some were getting Euro 18 through bilateral agreements. When the contract expires in December, it is expected that prices will be firm up then.

On MCX we already have power, energy and metal companies who are trading. These companies are high-energy consuming companies. They need better technology to emit less carbon.

Is this market also good for the small investors?

These carbon credits are with the large manufacturing companies who are adopting UNFCCC norms. Retail investors can come in the market and buy the contract if they think the market of carbon is going to firm up. Like any other asset they can buy these too. It is kept in the form of an electronic certificate.

We are keeping the registry and the ownership will travel from the original owner to the next buyer. In the short-term, large investors are likely to come and later we expect banks to get into the market too. This business is a function of money, and someone will have to hold on to these big transactions to sell at the appropriate time.

Isn’t it bit dubious to allow polluters in Europe to buy carbon credit and get away with it?

Tell us what’s the flip side of your business?

Like in the case of any other asset, its price is determined by a function of demand and supply. Now, norms are known and on that basis European companies will meet the target between December 2008 and 2012. People are wondering how much credit will be available in market at that time. To what extent would norms be met by European companies. . .

As December gets closer, it is possible that some government might tinker with these norms a little if the targets could not be met. If these norms are changed, prices can go through a correction. But, as of now, there is a very transparent mechanism in which the norms for the next five years have been fixed.

Governments have become signatories to the Kyoto Protocol and they have set the norms to reduce the level of carbon emission. Already companies are on way to meeting their target.